Sometimes I wish you could just jump inside a time machine and travel back to the beginning of the summer and re-live it all over again. With some added sunshine! Wouldn’t that be lovely?

August has flown by in Dorset, like I’m sure it has everywhere else.

Anyhow, here are some of my August highlights captured on my trusty iPhone 6. I’m still determined to stop procrastinating and get my pro camera out soon. Autumn will be perfect for capturing the changing seasons, right?! 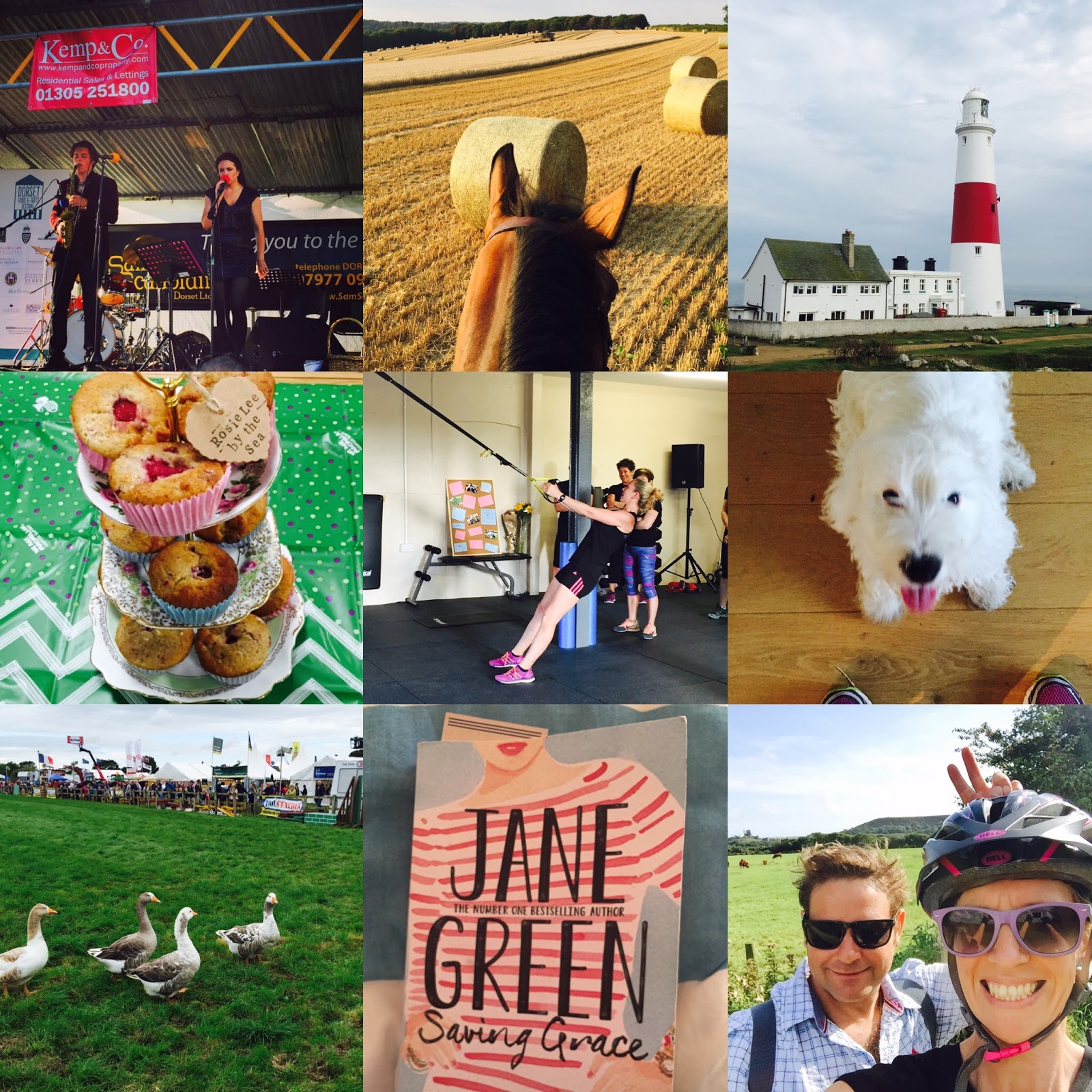 I popped up twice to this event. First time to buy some yummy goodies for lunch. I picked up a pasty and some scrumptious cakes from Eat Dark Matters. In the evening Dan & I cycled from Charminster via the Borough Gardens One World Festival and then back up to the Dorset Food & Arts Festival we enjoyed a lovely cider from Hall & Woodhouse who were promoting the still to be built pub. From the plans it looks mega. I’m so excited for this new pub to open in spring 2016. And who knew they produced a bottled cider? Pear and Apple Wood. We enjoyed a cider as the sunset watching brother & sister duo Charlotte & George Hewett.

There’s some irony in this photo. A few weeks ago, the horses were cooped up in their stables as we waited & waited for the farmer to take the hay off their meadow field. Which in turn caused some very frustrated & frisky horses on their rides, which was a good excuse for them to play up. Young Jonty decided he didn’t want to go through the gateway to the field pictured as there was a tractor on the other side of the hedge which was very scary. Yes, it really was. So, I jumped off to walk through the gateway & as soon as I walked through Jonty decided to pull the reins out of my hands and shot off across the field. I calmly thought that he’ll stop in a moment & then he disappeared out of sight! I started to run across the field of crops and spotted Jonty trotting on down the field near the woods. Thankfully he stopped to graze and I managed to catch him & on we went.

Little did I know until later that day & this week how much talk Jonty has caused. The farmer of the tractor spotted Jonty rider less, put 2 & 2 together & thought I’d fallen off! My parents had the police turn up to check I was okay, about 3 villagers the following week checked we were alright & I found out at Melplash Show that a horsey friend 2 miles up the track was out on her quad bikes looking for Jonty & me.

So, this photo is post that eventful Saturday morning during and evening ride. It looks pretty blissful with Jonty gazing out across the freshly cut field, with the combines hard at work. He didn’t take a blind bit of notice & we had a jolly ride in the evening sunshine. Horses!

The other weekend was a wet one, so Dan & I decided to go on a quick adventure walking around Portland bill before the storms came in. I haven’t been in yonks. You always notice something different each time around Portland.

When we left the island we popped into Billy Winters for a beer a shabby chic style café based on Ferrybridge serving fresh fish, cocktails with a chilled out vibe.

With the return of the Great British Bake Off this month, talk at work turned to cake and somehow we decided to have a Great Studio Bake Off #gsbo

I decided to make my traditional raspberry, strawberry & white choc muffins which is based on this recipe I merchandised mine on my gorgeous cake stand from Gemma at  Rosie Lee by the Sea

Sadly, I wasn’t a winner, but all my muffins were eaten – so I take that as a good sign!

Congrats to Lloyd who won with his very yummy Rocky Road cakes!

My friend Claire Tuck, a Dorchester based personal trainer and sports masseuse had a launch event for the opening of her new venture – Ultimate Fitness. Based just outside Dorchester on the Jonson Trading Park, Alington Avenue. The main classes will include Bootcamp using the fab outdoor facilities – think Tough Mudder but even better, Strength & Conditioning & Personal Training Groups.

I can’t wait for the evenings to start getting darker so I can switch from riding after work to working out.

Mum & I took Alfie to a puppy meet & greet at our local vets. There were 4 pups in total: a quiet collie, a labradoodle, a boisterous retriever & Alfie a Sporting Lucas Terrier cross.

He was a very well behaved pup & loved meeting new puppies. He’s starting to get stronger and a lot more active. Definitely time for some longer walks.

Oh, and it was National Dog Day on 26th August, so here’s an ode to Alfie, not that he needs anymore admirers, but he’s very cute.

One of my favourite agricultural shows of the year. We were taking part in the very early Local Hunter Class. Sadly, it was too early for the judge and she seemed to not take any notice of Jonty, so no rosettes for us this year.

As we were finished by 9am we decided to have a walk round the show and sample the agricultural delights. This photo captures a funny yet almost carnage moment, when the geese who were being prepped for a display escaped from their pen into the main ring where the working hunter class was taking place.

I finally finished a book!! It’s only taken me nearly 3 months to complete. The satisfaction of reaching that final chapter was great & it was actually a pretty decent book by Jane Green, so much so I wrote a book review.

After getting the biking buzz in Jersey, Dan & I loaded the van up with the bikes & headed over to Wareham to cycle round the Purbecks. We covered about 15ish miles whizzing around the cycle network taking in the sights, including Corfe Castle which you can just about spot in the distance. More about beers & biking in my next blog….

And that’s it for August. It was pretty jam packed. Roll on September & an Indian summer!!

What did you guys get up to in August? Any delights from the west country you’d like to share?

PS. If you have any feedback on the Country Bumpkin Chic blog posts, I’d love to hear what you think. You can either leave a comment below or via my ‘get social’ links.