A week ago I arrived back from an amazing week on the Surf Maroc Girls Surf Camp in Taghazout. I met some fab people, had a lot of laughs in & out of the water, caught my first proper green waves & had a speeding fine – less said about that the better! Anyhow to combat the holiday blues, here’s my top ten snaps from Taghazout.

1. The view from my bedroom.
The Taghazout Villa is set right on the beach & you can see Hash Point break which is perfect for the pro surfers in the winter. I had a cosy turquoise coloured double room to myself & loved waking up to the sound of the waves crashing on the rocks. I also went to sleep to the sound of the Moroccan youth club playing berber music! 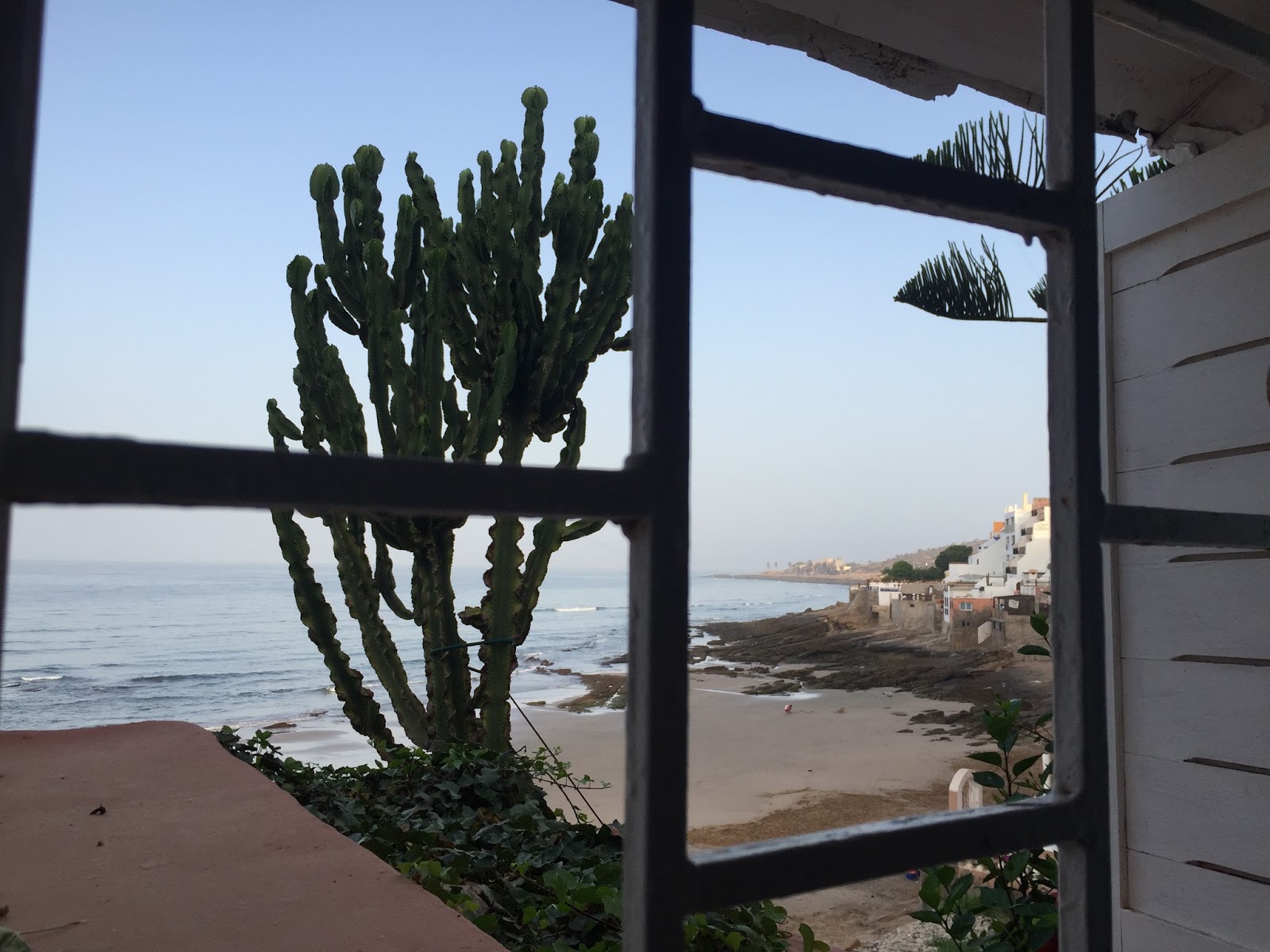 2. A stone’s throw away from the sea
We were literally a hop, skip & a jump away from the sea. Which came in very handy on our last night when it had been 44C, so we could cool off whenever we wanted. We also had a paddle board race on Thursday afternoon – which was tougher than it looked, but you don’t mind when the sun is shining. 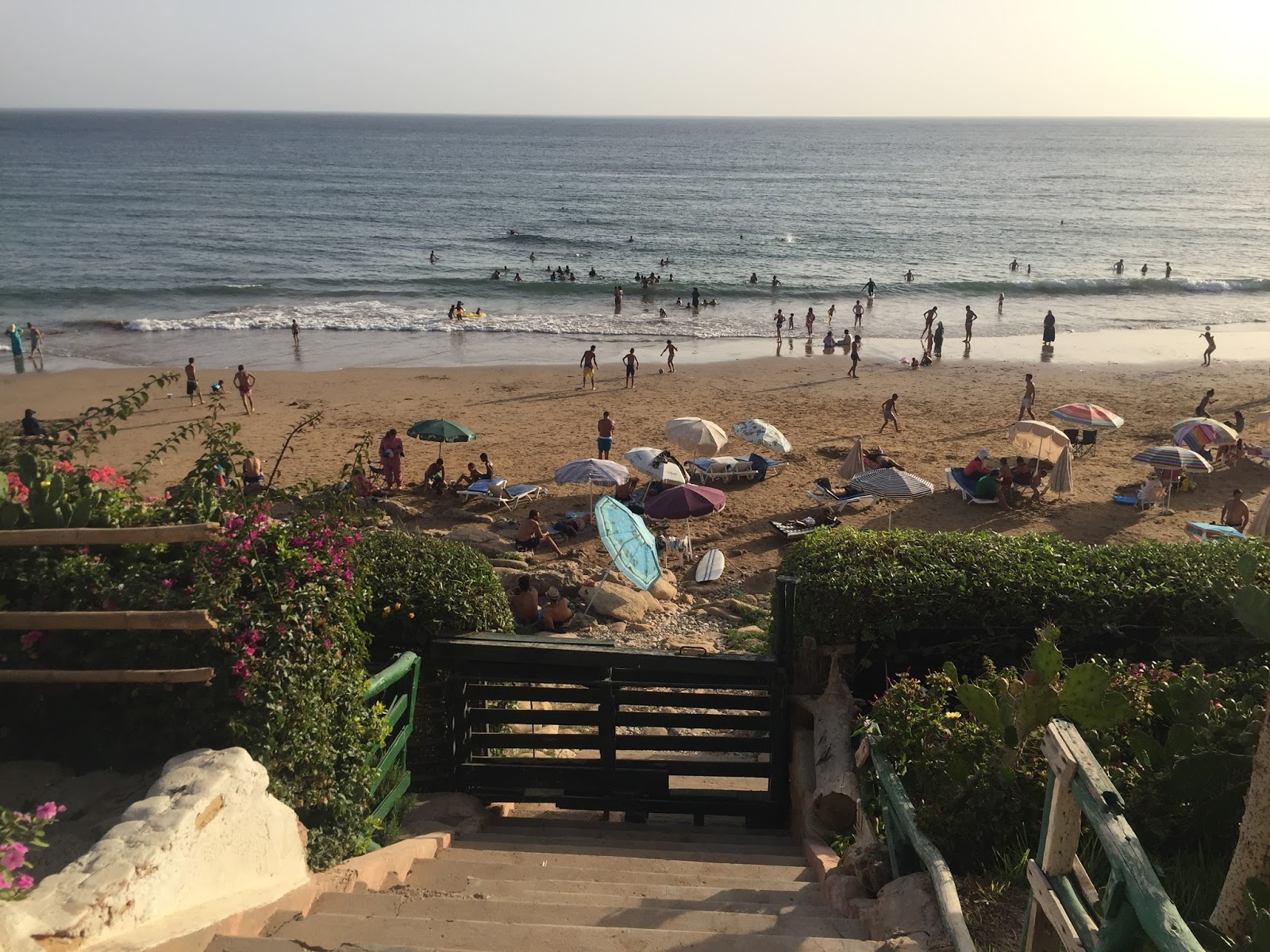 3. Devil’s Rock
This is the view from the top of Devil’s Rock. It’s where we spent 5 out of 6 of our surfing days having fun foamy moments catching white water waves & our first green waves. It was also a great place to chill out on the beach & watch the world go by. I don’t think I’ve ever seen so many strange sights with camels, horses, Shetland ponies & dogs on the beach all at the same time. 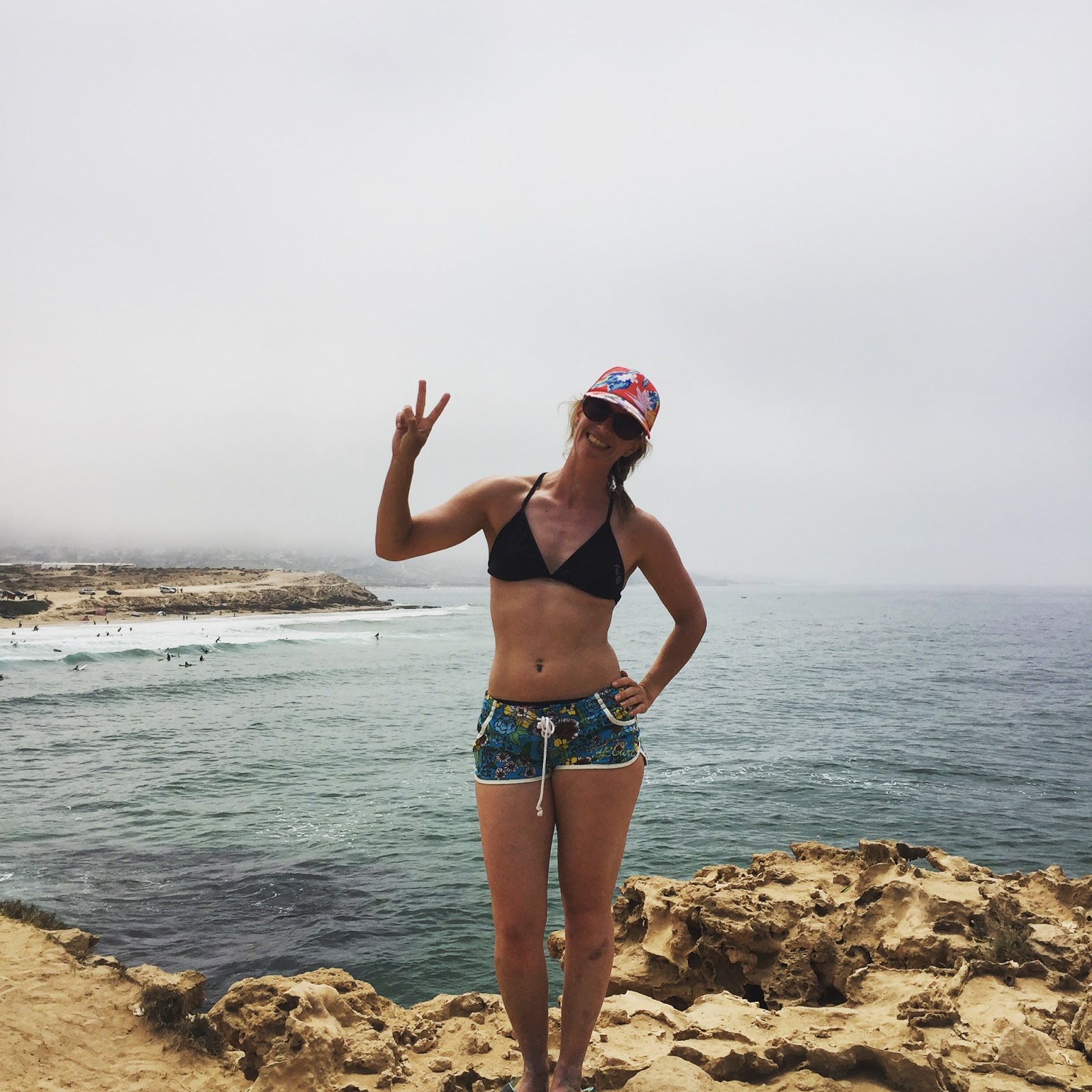 4. Anza Souk
On our day off we popped to Anza Souk which had a mix of vintage clothes from Spain, as well as traditional fruit & veg stands, spices, & meats! I’ll spare you the photos of hung camel & goat’s heads. This guy looked pretty at home amongst his thousands of tomatoes. 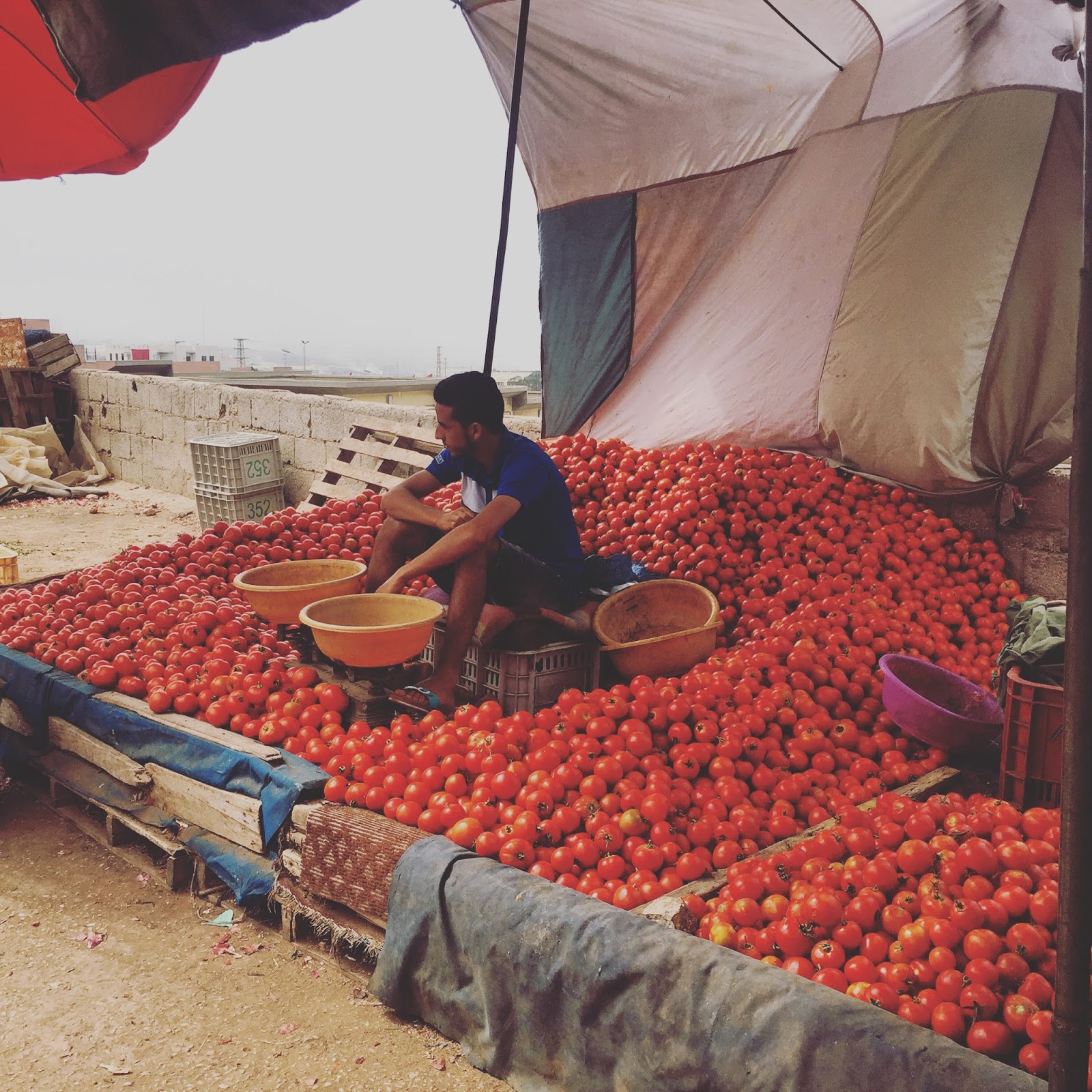 5. Imsouane
We made an early morning trip to Imsouane a fishing village north of Taghazout. It had an amazing bay for catching the longest waves you can ride all the way to the beach. Not quite as powerful as Devil’s, but fun all the same & depending on the tide you can either walk back up the beach & pop in to catch a wave or paddle back – the choice was yours depending on how energetic you felt. Or you could sit & watch the world go by over coffee or try the local catch for lunch like we did – which turned into a huge feast. It was a fun road trip with plenty of Spotify tunes & laughs along the way. 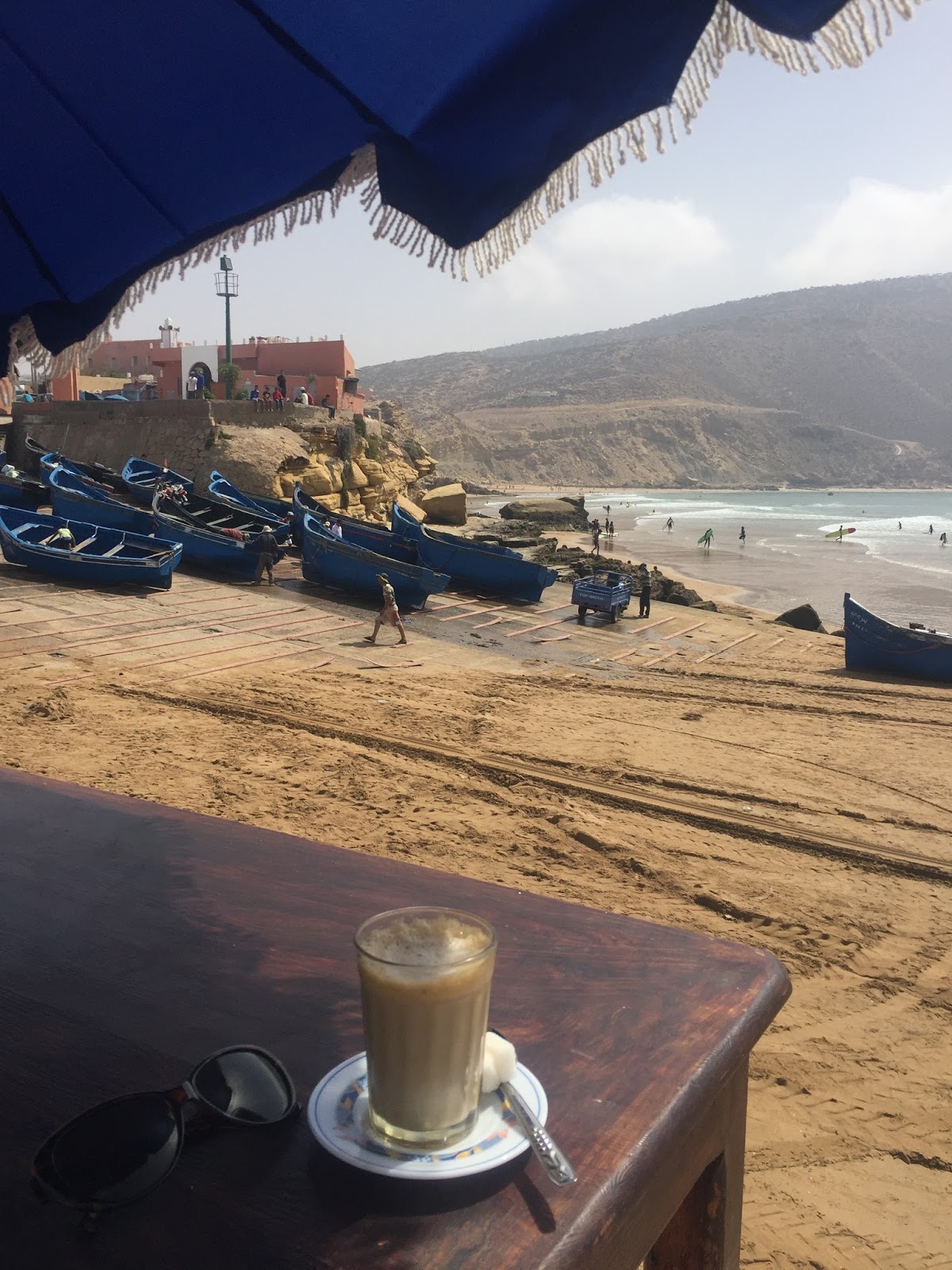 Taghazout village is pretty small with some cafes and surf shops, but has plenty of charm & amazing surf inspired art murals. I love this snap of the 3 Moroccan men just chilling out. That’s what they did most of the day, you hardly saw the women. 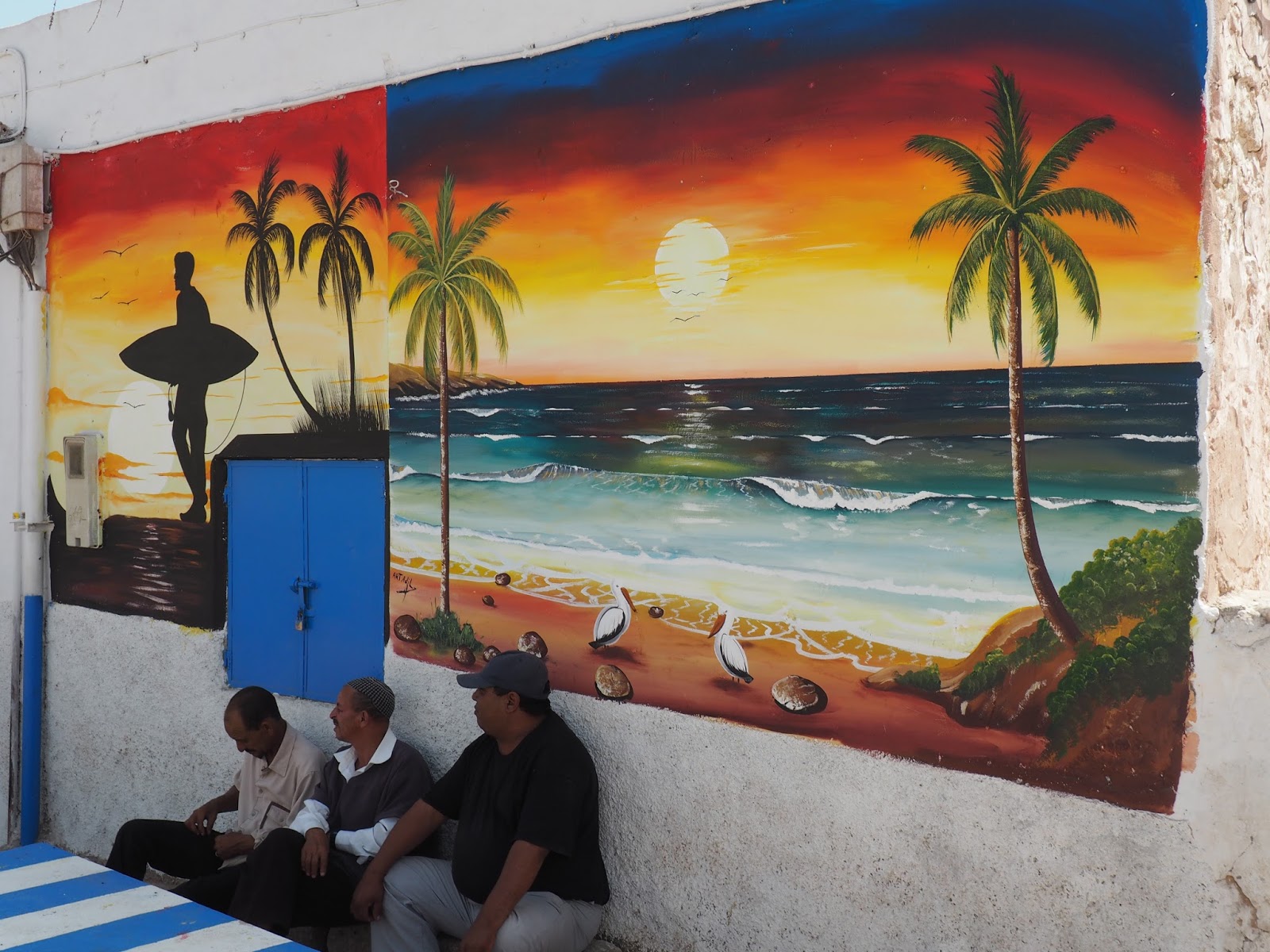 7. Evening Yoga
Each night we had an hour’s vinyasa yoga with yogi instructors Jo or Taylor to stretch out the muscles after a day of surfing. Some days were definitely harder than others but that was mainly down to the achy joints. On our last day we managed a yoga session in 44C heat, probably the closest I’ll come to bikram yoga! 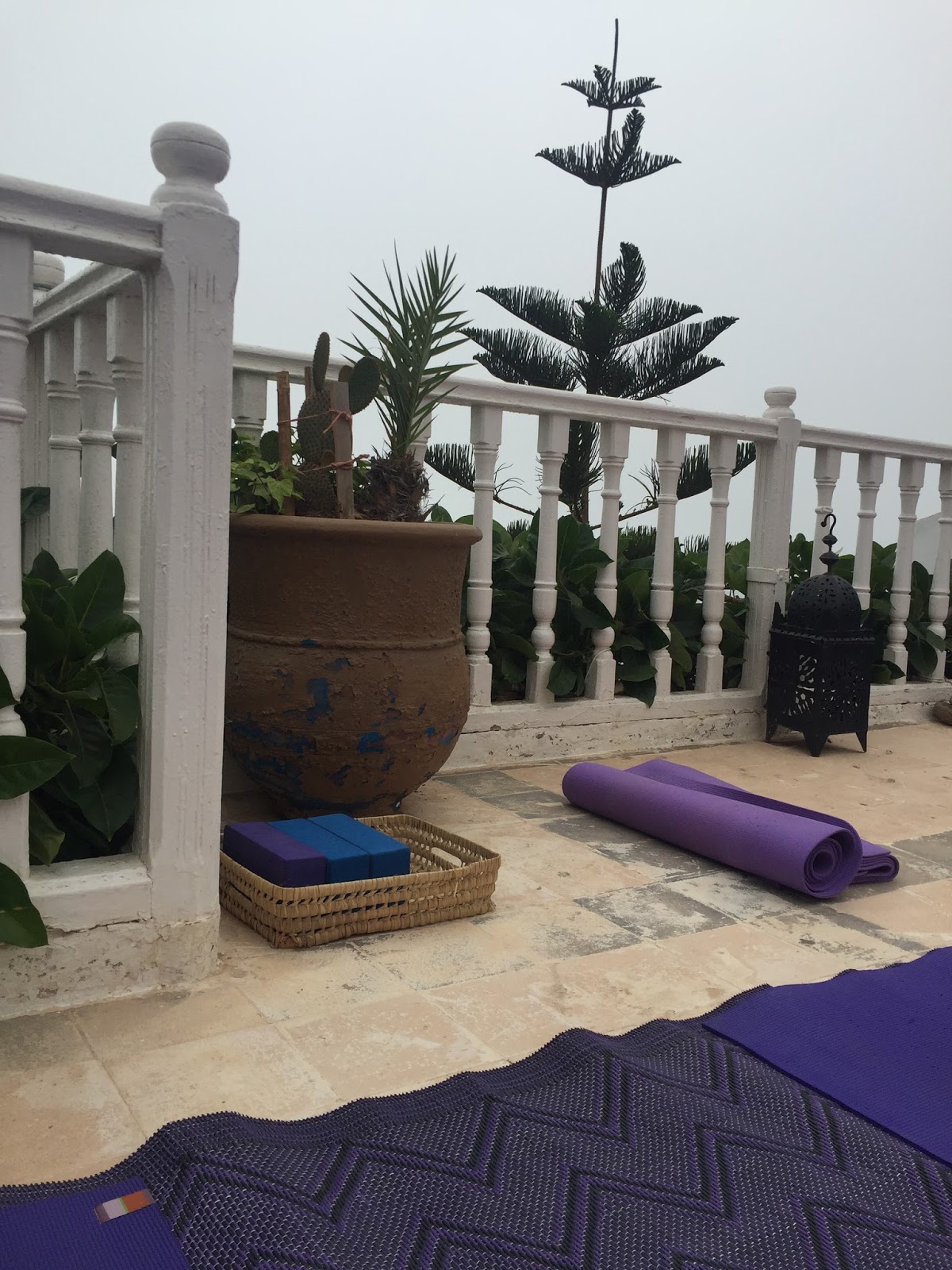 8. BBQ
Thursday night was BBQ night at the Auberge, the Surf Maroc hostel is located in a spectacular spot overlooking the beach at Taghazout. A Moroccan Berber band played as the sun set on a fun packed day after our trip to Imsouane & paddle board race – I don’t think any of us wanted it to end. Although somehow again I managed to head home just a tad too early missing all the fun & skinny dipping!! 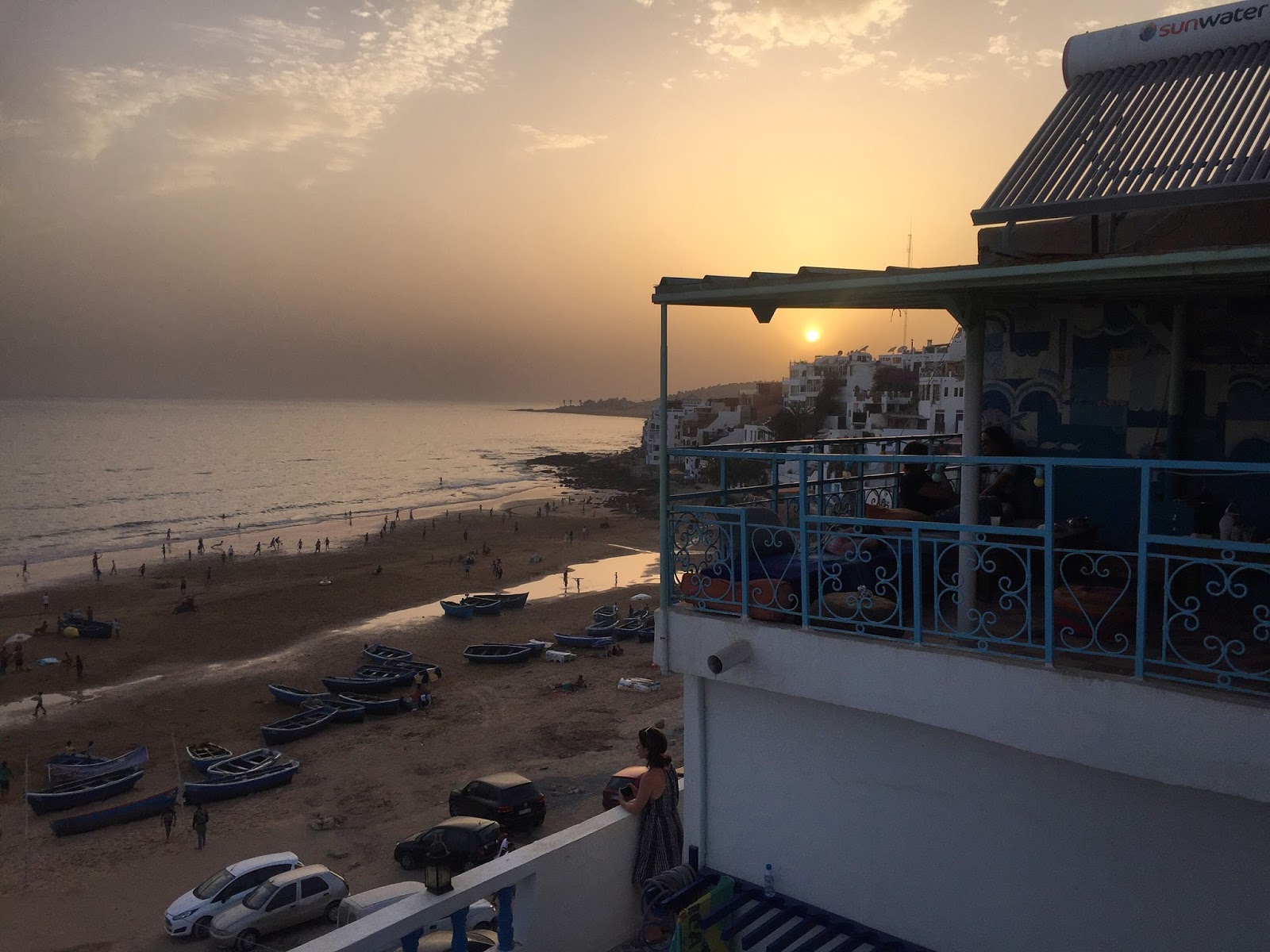 It’s difficult not to fall in love with surfing when you’re in Morocco. During the summer months all you need is a foamy board, an attitude to have fun, determination to keep going & you’re pretty much there. I was chuffed that by day 3 I’d caught some green waves – a real adrenaline rush as you feel like you’re flying out of the wave. Not sure I’ve sworn so much in a long time. Even the little white water waves were so much fun & worth a ‘whoop whoop’! 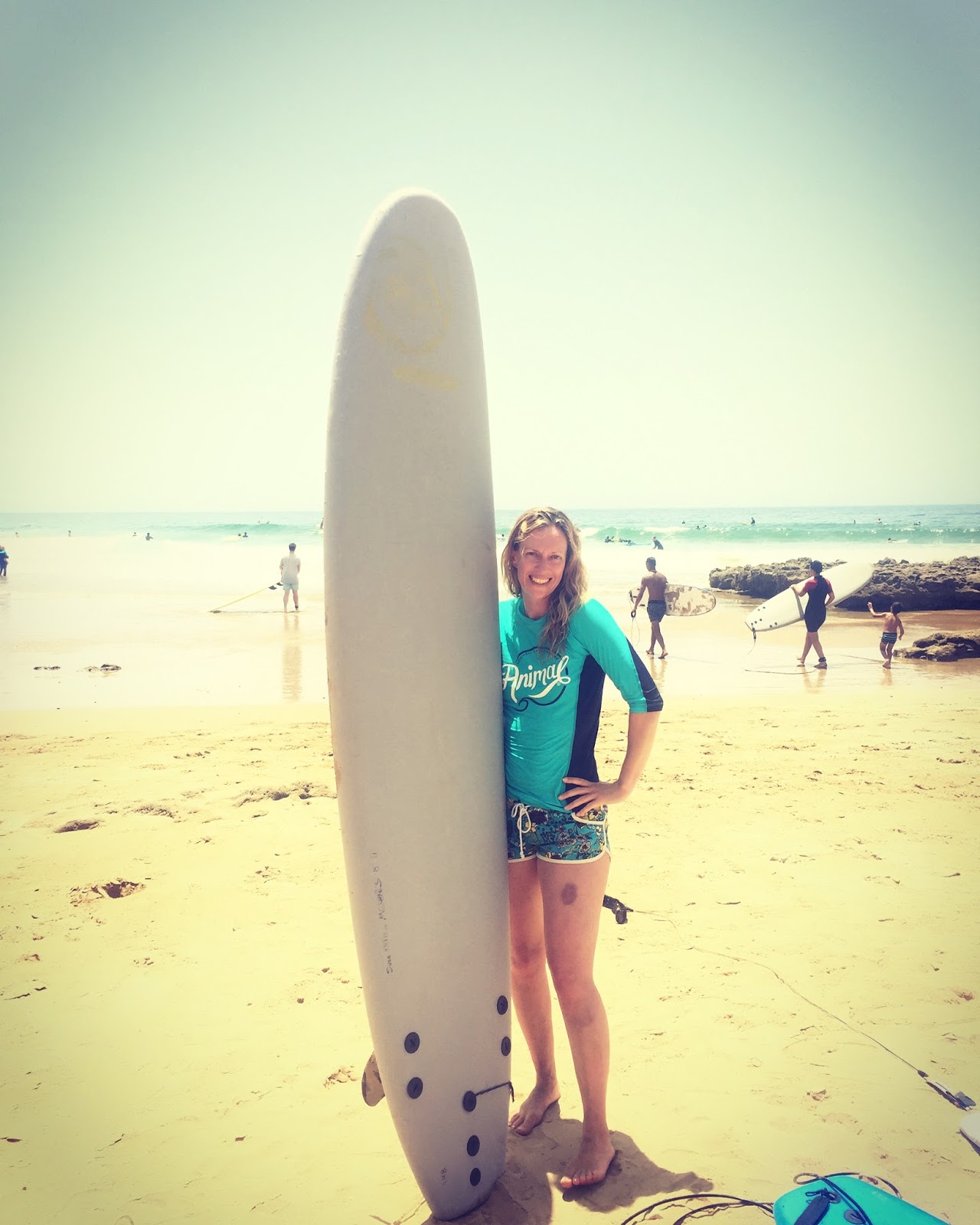 If it hadn’t been for the fellow surfer chicks I’d met on the Girls Surf Maroc camp, I don’t think my Moroccan adventure would have been the same. It’s not often you meet a bunch of girls where you all just click from the moment you meet because you have the same love for the outdoors, fun times & music – well most of the time! I think I’ve forgotten the Justin Bieber songs! 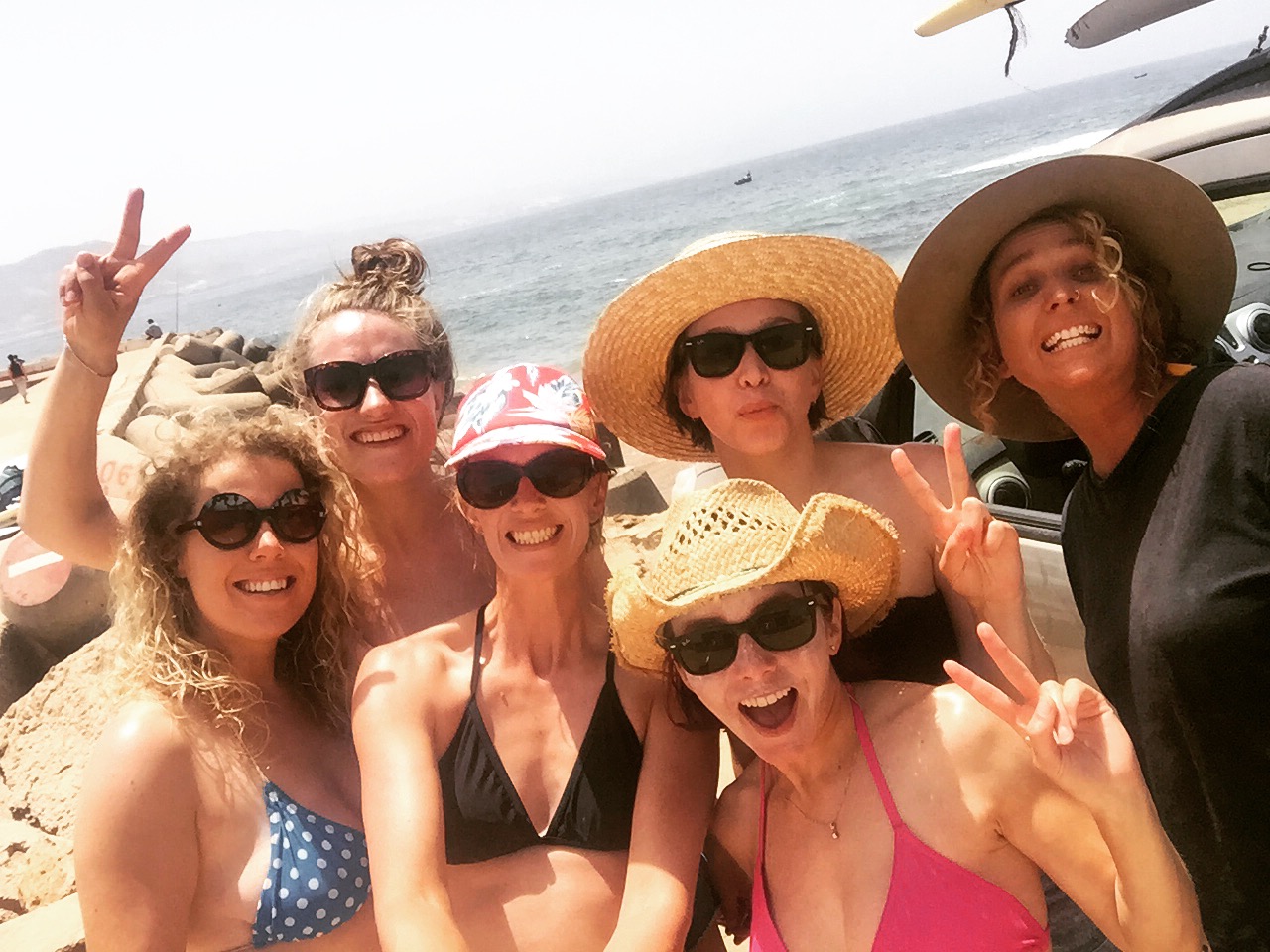 So where next? I’d love to hear your surfing stories or recommendations on where you think I should head next?